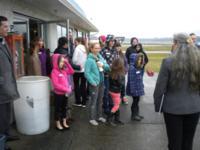 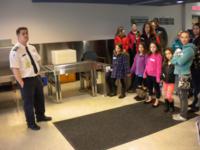 Then the real fun – rides in the airport fire truck up front and saw the long thrust of the powerful water gun. Then another wet walk back to the NFC clubhouse and a quick look at a C-172. Weather was too poor to fly so the girls had to forego that pleasure Andrea had planned for them. A short talk and some gifts conclude an unfortunately wet Saturday. Kayla won the draw for a flight accompanied by dad Tyler and friend Jayda with Andrea the weekend after, thanks Autumn, for the use of his aircraft.