Thank-you to all who volunteer!

Our club would be a pretty dull place if it weren’t for the continual energy and enthusiasm of so many volunteers who keep “stuff” happening.  Like this duo of fantastic kitchen helpers: 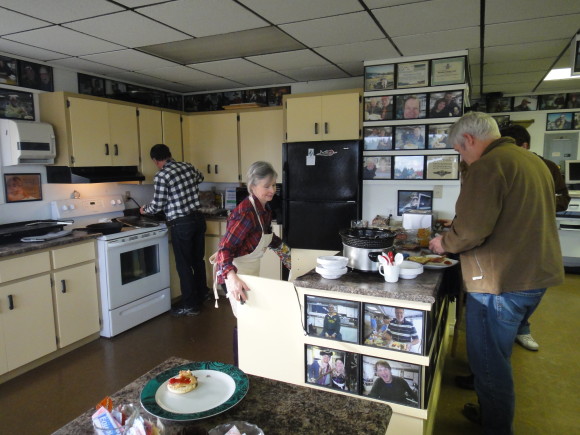 Our very own Austro-Hungarian Empire, John Balogh and Bob Lepschi, who have been know to team up and prepare us some delightful treats from “the continent.” 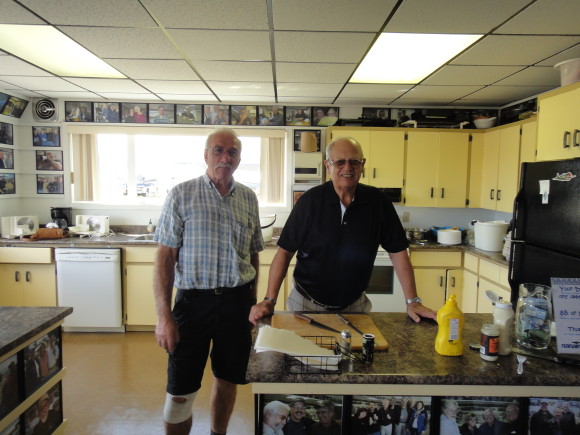 It seems to me that there is a shortage of good aviation books about us little guys – the average general aviation pilots.  There is no shortage of textbooks and such, but I’m talking about the books we read for general interest and relaxation.  Thank goodness for Garth Wallace.

Garth has been writing about his flying adventures for several volumes now and each book is a treat. He’s a great story teller and the characters in his tales are all familiar to anyone who hangs around local general aviation airports.  Here’s the first book he published and a sample chapter – it’s a good place to start your Garth Wallace adventures –

Chapter two / Have you ever been in a boat?

Gary Pettigrew was a forty-year-old, skinny runt of a man who would need tying down in a wind. He sat hunched over his desk looking through sad eyes like an obedient dog trained by force. He seemed out of place in his role as manager of Bannister Airways in Paradise. He looked at my pilot’s log book and asked a few questions about my background. His tone indicated that the instructor/pilot job was mine if I wanted it.

I did. The further north I had driven from my old flying school, the more I realized that I needed this change. If there had been any doubt in my mind, it had vanished at the sight of the floatplanes bobbing beside the dock at Bannister Airways. It was a clear, cool day in April and the pine-scented air was crisp and fresh with the promise of spring. The airplanes tugged at their lines with each wave, beckoning me to join them in the blue sky. They had settled it, I was going to be a bush pilot.

Pettigrew squirmed in his chair, trying to think of what to ask me next. It seemed to me that he should just name the salary and tell me when I could start, but I remained silent, confident that the job would be mine very soon. Then came the bomb. At that moment Clifford Bannister barged through the door like a wrecking ball and stopped in the middle of the room. He glared at me with large eyes set in a puffy, red face. Clifford Bannister was a round, loud man in his mid-fifties. His entry emphasized his position as owner and president of Bannister Airways. He turned to Pettigrew and bellowed, “My God Gary, he’s a walking Supercub load!”
I was admittedly heavy for my size. Eating had been a happy and frequent part of my life, but I had never considered myself a walking load for a two-place airplane. I suppressed a childish urge to toss a comeback to Bannister, like; “People in glass houses shouldn’t throw stones”. I stared nervously at the hair growing out of his ears and said nothing. Since my meeting with the manager had been friendly to this point, I waited for Pettigrew’s reaction to the owner’s remark. He didn’t say anything.
Ignoring any formalities, Bannister plopped himself into a chair and started asking me questions. “How much time do you have flying a DeHavilland Beaver?”

The Beaver was a Canadian-built, seven-passenger wonder of a bushplane, designed to haul huge loads out of postage-stamp lakes. I had never touched one, but it was a real pilot’s airplane that I hoped to fly. Bannister owned two of them.

“None sir, I have never been in one.”
“Figures,” he said rolling his eyes, “I suppose you have never been in a Found either.”
“I have never heard of a Found, sir,” I replied truthfully.
I discovered later that a Found was a smaller airplane that wanted to grow up to be a Beaver, but didn’t make it. There would be days ahead when I would wish that I had never seen a Found.
“Humph,” he grunted, “do you have any Cessna One-Eighty time?”
“None, but I have 200 hours in Cessna One-Seventy-Twos,” I replied.
I wasn’t doing very well. These were both four-place airplanes, but comparing the One-Seventy-Two to a demanding bushplane like the One-Eighty was like comparing a Harley-Davidson to a Honda scooter with training wheels. It didn’t pacify him. Gary Pettigrew slouched lower over his desk as Bannister’s face grew redder.

“Have you ever flown a Supercub before?” His tone with this question demanded a yes.
“No sir, but I have instructed on a Citabria.”
I thought I might score some badly needed points here since the two types of airplanes were similar, but, by his look, I could see that he had never heard of a Citabria.
His scowl worsened and my hopes of experiencing the freedom of float flying, of skimming over the area’s unspoiled lakes and trees, started to sink.

“Well, how much float experience do you have?”
That was it. Pettigrew knew I had none so I couldn’t lie. He had however, invited me for the interview.
“I don’t have any float time, sir.”
“Well goddammit Pettigrew, what is this?” his voice rose with his bulk as he heaved himself out of the chair. Leaning towards me, he barked, “Tell me son, have you ever been in a boat?”
“Yes sir,” I sputtered, “I taught sailing at a boys’ camp.”
“Well bully for you,” he roared as he left the room.

Bannister’s mood may have been spiked by the still fresh memory of the previous flying instructor. Pettigrew had told me that the pilot had taken off on a drunken joy ride one night in the company’s best DeHavilland Beaver. After several low passes over Bannister’s house, he had torn up the floats landing on submerged rocks. He escaped Bannister’s wrath by departing town straight from the wreck.

The interview was over in less than a minute. I felt that any chance of landing this job went out the door with the pompous owner. I consoled myself with the fact there were other openings with the current instructor shortage, but I had been looking forward to flying floatplanes here.
Pettigrew’s nasal voice broke the silence. After nervously checking the hall to ensure that his boss was gone, he apologized. “He comes on strong, doesn’t he? Don’t let his gruff manner bother you.”

“That’s all right,” I lied. I was bitter. There was no reason to invite me to Paradise to belittle me. “Thanks for the interview anyway.” As I got up to leave, I extended my hand out of courtesy and an urge to help the little man unbend himself.

“Before you go, I will outline our salary structure and arrange your starting time,” he wheezed. I was only half listening because I was still thinking of how I should have handled Bannister’s barrage. I could have mentioned the skipper’s pin I had earned at the junior yacht club or shown him my Red Cross swimmer’s badge. I could have lied and claimed Boeing 747 float time. It took me a minute to realize what Pettigrew was saying.

“Are you suggesting that I’m hired?” I asked.
“Yes. I might say that Mr. Bannister was a bit rough on you, but he likes to sound out our new staff before they are hired. I hope you were not offended, because I have no other candidates for the job. I’m sure you will find him a fair man to work for. Are you still interested?”

I was filled with mixed emotions. The warm prospect of being able to change jobs flooded back over me, but I was suffering from the emotional whiplash dealt to me by the owner. I didn’t like being fodder for the grouch, but I recovered quickly and told Pettigrew that I would accept the position. I figured if Bannister made a habit out of ripping pieces off his staff, then I could always get drunk one night and buzz his house in a Beaver before leaving town.

For some good aviation-oriented reading, here’s an aviation journal produced by a local pilot/publisher – worth checking out: 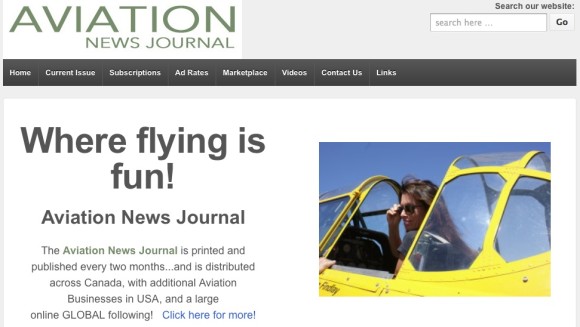 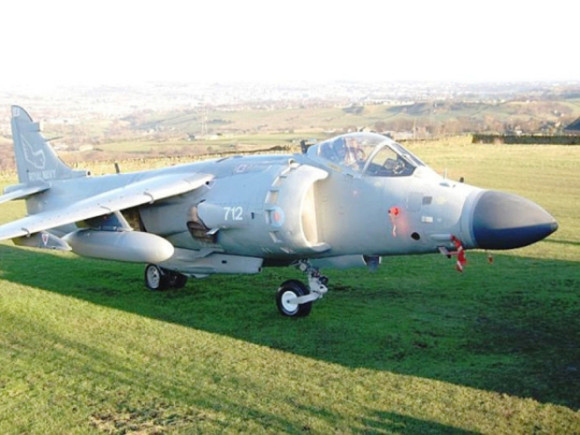 It’s a Dirty Job, But Someone’s Gotta Fly This Baby…

For some Friday Frivolity – the 2014 Sport’s Illustrated Swimsuit Issue went airborne in zero G… Looks like fun – in so many ways: 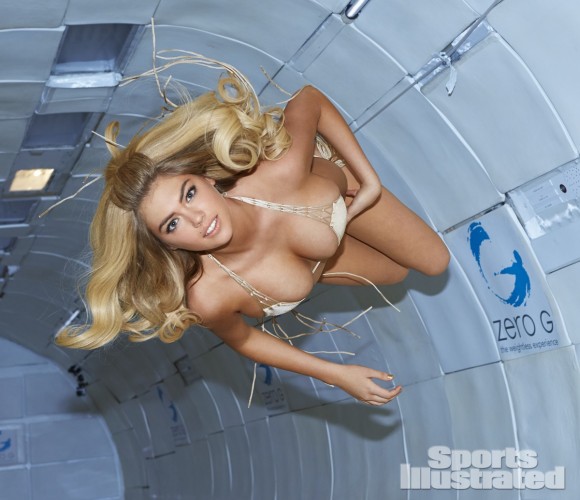 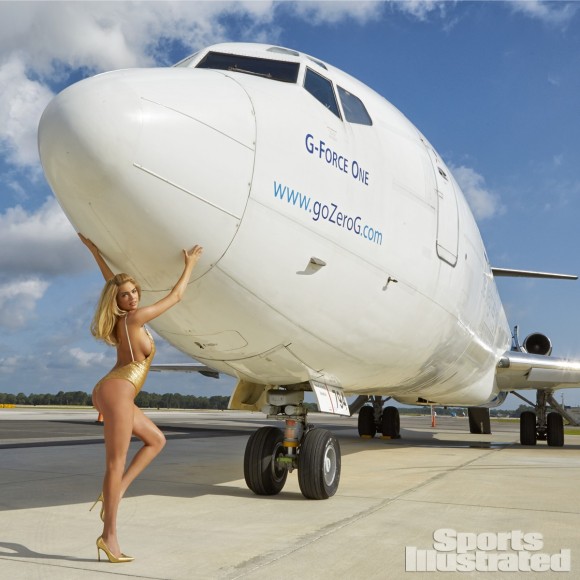 It’s only a matter of time… with passengers demanding cheaper and cheaper flights… Airbus and others are looking at the possibility of standing-room-only cabins. 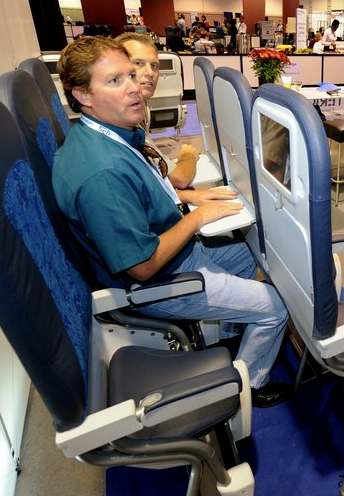 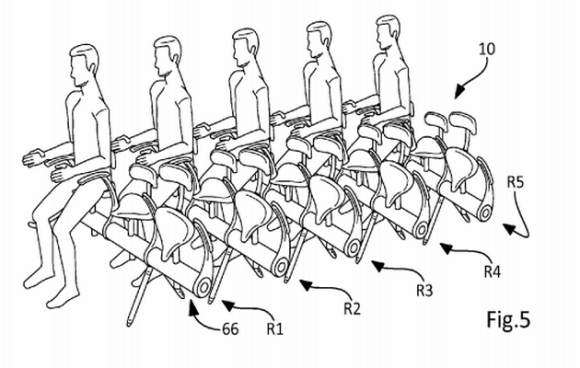 Come And Get It 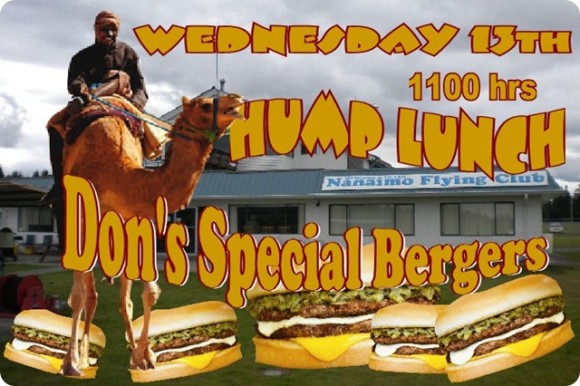 It’s been called the “Walmartization” of the airline industry.  Over the past several years there has been a race to the bottom as  companies try to respond to consumers’ demand for cheaper and cheaper flights!  So, are you ready for this? Are you? Huh?!

Keep Alert and Watch For Traffic! 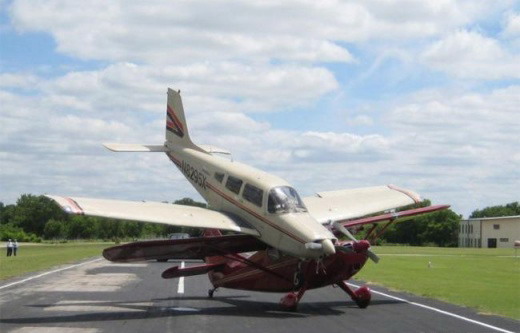 It’s the busy summer flying season, and a weekend, to boot.  Please!  Keep the Mark 1 Eyeballs constantly scanning the airspace around you and be aware of local traffic.  That is all. As you were.

Our "Inter Flying Club Brunch" held the 1st Saturday of each month, all pilots & guests are invited to join-in!        more...