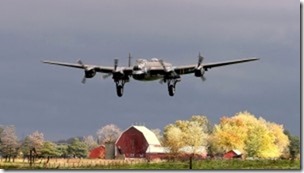 The winning bid for a seat on an intercontinental flight aboard a famous Second World War bomber fetched almost double the asking price over the weekend.

A $79,100 bid assured someone a spot on the Avro Lancaster when it flies to England in August.  The aircraft was bought for $10,000 in 1977.  The reserve bid was $40,000. Hamilton’s Canadian Warplane Heritage Museum auctioned off the opportunity to help pay for a month-long flying tour of the U.K. alongside the Royal Air Force’s Battle of Britain Memorial Flight (BBMF) Lancaster.  WOW What a ride!